It’s an undeniable truth: Mexican food is delicious. But with the many foreign words featured on a traditional Mexican food menu, it can sometimes be hard to know what you’re actually ordering.

Curious about increasing your Mexican food vocabulary? Here, we’ve assembled some common culinary terms that you’ll find on Borracha Mexican Cantina’s menu and definitions for each one so that you can increase your understanding and hopefully, expand your palate as well!

Al Pastor: Pastor means “shepherd”, and this dish’s name is a shout-out to the Lebanese merchants who came to Mexico in the early 1900s, bringing the idea of shawarma with them. Al pastor style meats feature thin meat shavings which are marinated with spices and sometimes pineapple. They’re a little sweet and a little savory all at once! At Borracha, we feature Chicken Al Pastor as the protein option in our tacos (both street and traditional style) and burritos! 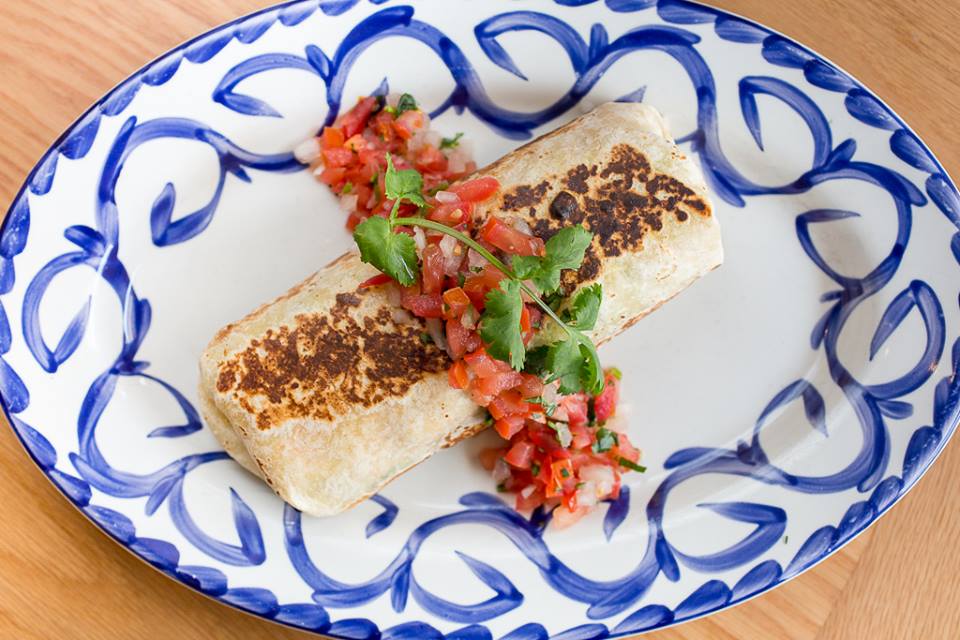 Burrito: A burrito is a Mexican food classic, comprised of fillings (often meat, vegetables, beans, and rice) which are wrapped in a large wheat tortilla.  At Borracha, we make our burritos with your choice of protein (Chicken Al Pastor, Carne Asada, Grilled Mahi Mahi, or Breakfast Burrito), served with cheese, arbol and cholula sauce, and rice and beans.

Carne asada: Translated, carne asada simply means  “grilled meat”. And that is true: carne asada is, in fact, grilled meat, usually, thinly sliced beef. This meat is often served as a protein in tacos, burritos, or fajitas. At Borracha, we feature our delicious carne asada in burritos, as a meat main dish, in our brown rice bowls, and in our tacos (both street and traditional style)

Ceviche: This recipe features raw fish and seafood which is effectively “cooked” by an acidic ingredient or ingredients. The mixture also includes plenty of aromatics. At Borracha, our version includes avocado, pickled red onions, agave nectar, and cilantro vinaigrette. It’s an elegant appetizer, and a delicious high protein item on our menu! (Note: We also offer a vegan version of ceviche!) 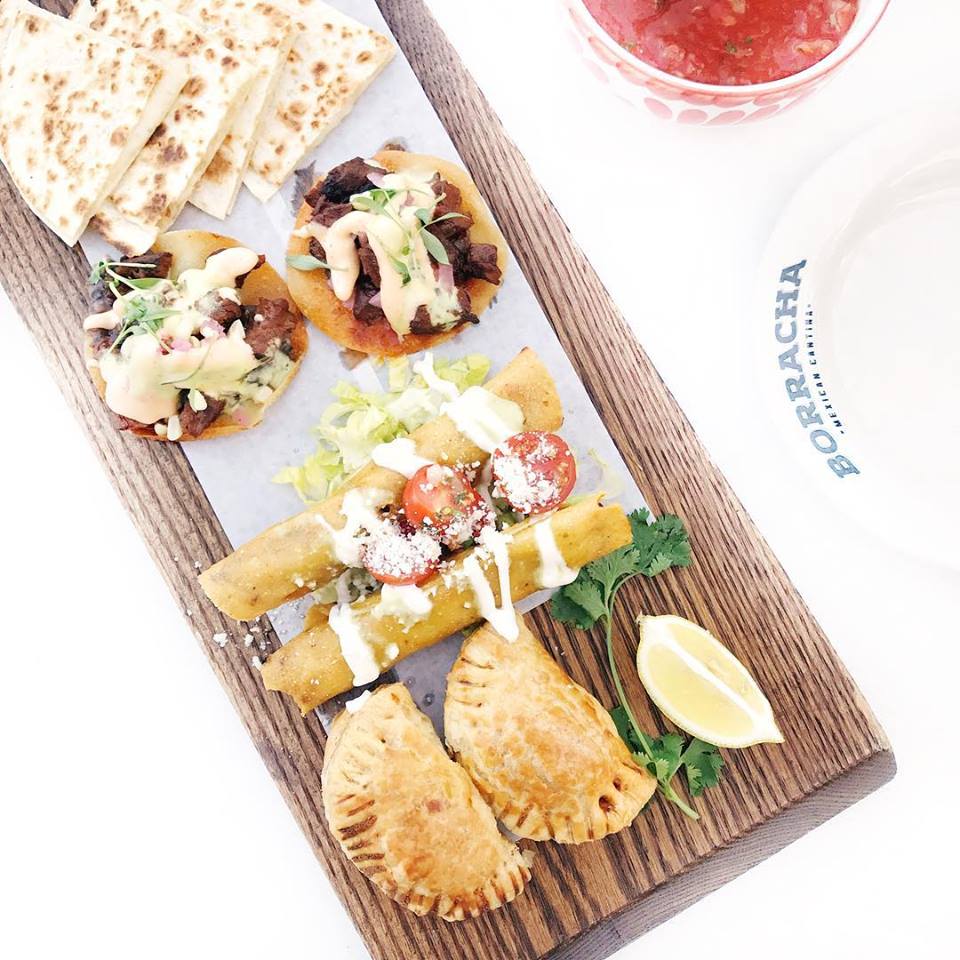 Empanada: An empanada is a type of hand-held pie made from pastry which is wrapped around fillings, either sweet or savory. Empanadas can be baked or fried. At Borracha,

we offer a beef empanadas appetizer. These empanadas are delicious, with rich beef flavored with with cinnamon and sofrito roasted tomato sauce. It’s the perfect start to your meal!

Fajitas: Are you ready for some sizzle? Fajitas are a dish consisting of strips of spiced protein such as chicken or beef, chopped vegetables, and cheese, which are wrapped in tortillas. They often arrive sizzling hot! At Borracha, you can take your choice of Grilled Chicken, Grilled Mahi Mahi, Grilled Steak, Shrimp, or Veggies and Tofu.

Fundido: Melty cheese lovers, rejoice! Fundido is a dish made from hot, melted cheese and other ingredients which are served bubbling hot. At Borracha, ours is made with a asadero and jack cheese blend with chorizo, which is topped with guacamole, pickled red onions, and cherry tomatoes, and pico de gallo. OMG alert!

Panela cheese: This soft cheese is made from pasteurized cow’s milk. Not to be confused with queso canasta, this soft Mexican cheese is often served with salads or as a garnish. At Borracha, you can find panela cheese atop our Smoked Tomato and Tortilla Soup, which is made with smoked tomato and pulled chicken. Delicious!

Pico de gallo: This is an important ingredient, component, and sauce in Mexican cuisine. Also referred sometimes as “salsa fresca,” this is a melange of chopped tomato, onion, cilantro, and other flavorings. At Borracha, you’ll find it pico de gallo featured in a number of the dishes in our menu, either in the dish or as a garnish.

Quesadilla: Some of the greatest pleasures are the simplest ones. Case in point: quesadillas! A quesadilla is a tortilla which is filled with cheese and then griddled to toasty-melty perfection. At Borracha, ours is made with a crispy flour tortilla, Mexican cheese, arbol salsa, cholula sauce, and all the fixings.

Taquitos: To make taquitos, a small amount of chicken, beef, or cheese are rolled tightly into a tortilla which is then fried until perfectly crisp. These are an amazingly flavorful snack and an ideal appetizer! At Borracha, our Crispy Taquitos are served with poblano cream sauce, sour cream, guacamole, cotija cheese, cherry tomatoes, and pico de gallo. 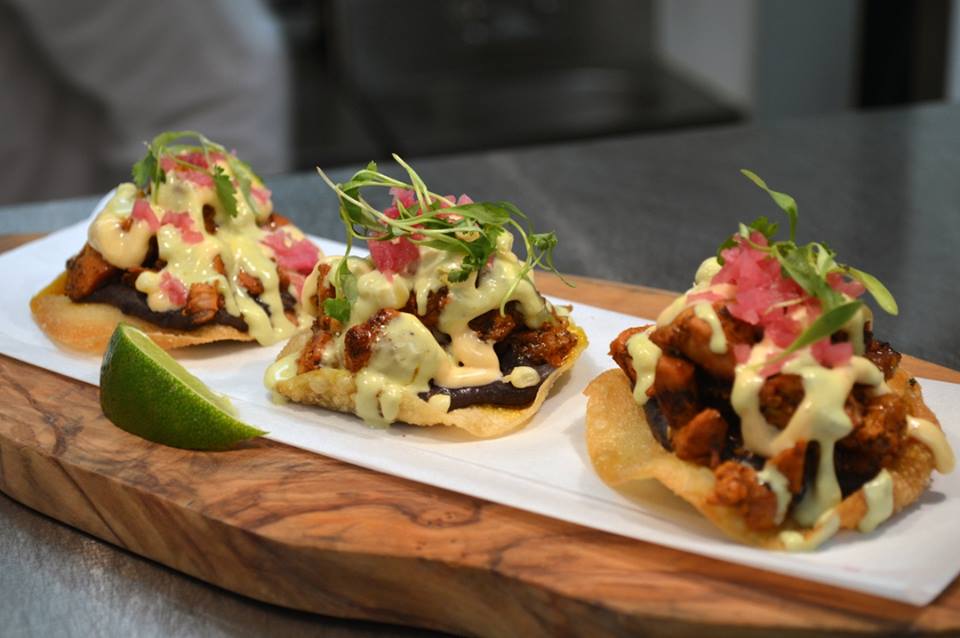 Tostada: Translating as “toasted,” in the culinary sphere, a tostada is usually a tortilla which becomes toasty-crispy during a brief period of frying. The tostada then might be topped like a taco, or filled with salad fixings. At Borracha, we offer tostadas as an appetizer; we also have an enticing tostada salad, made with grilled corn, cotija cheese, cherry tomatoes, panela cheese, black beans, pickled red onion, red bell pepper, cucumber, sliced avocados, and lime vinaigrette.

Now that you have an expanded Mexican food vocabulary, put it to work! Come to our Mexican Cantina and see for yourself how delicious these many dishes can be. And don’t forget to order a cocktail to pair with them!