When asked about what makes a restaurant great, most people will instantly reply “the food”. Well, of course this is very true. But while the food is clearly the heart and soul of a restaurant, it’s far from the only ingredient for greatness. The ambience of a restaurant, including the decor, artwork, and overall style, plays a huge part in making an establishment memorable.

At Borracha, we want to give you a dining experience you’ll never forget. We don’t merely want to provide you with fantastic and creative cuisine and stellar service, but to offer up a space that makes your evening out truly magical. So how do we do that? With a thoughtfully designed and artfully decorated space that is unlike anything else.

Here, we’ll introduce you to our award-winning decor and memorable artwork, and explain how these visual components help round out the concept of our eatery so that we can offer a dining experience that is truly one of a kind.

Before you can create a great ambience, you must start out with a firmly defined concept. In the case of Borracha, the concept is borne of the fascinating flavors, art, and culture of Mexico. Our goal is to allow this vibrant culture, combined with a healthy dose of irreverence and creativity, to come to life via our establishment.

A huge source of Borracha’s inspiration comes from a Mexican tradition involving…well, death. In Mexico, the days after Halloween are a celebratory time which are referred to as Dia de los Muertos, which translates as “Day of the Dead”. While it may initially sound macabre, it’s actually quite a festive occasion on which to remember and celebrate departed loved ones. There are a number of traditions which go along with this celebration, including specific foods such as pan de muerto, brightly colored flower arrangements and flags, and the creation of visually stunning, intricate sugar skulls which are used as decorations.

But don’t forget that healthy dose of irreverence! “Borracha” itself roughly translates as “drunken woman”; according to Brian Massie, one of the masterminds behind the restaurant, “we were trying to find a nontraditional name for a Mexican restaurant. And it’s a funny, cool, hip kind of name. People get it and it just fits for us.”

The concept and goal of Borracha is to deliver premium Mexican cuisine with the celebratory vibe of Dia de los Muertos, but also to feel like it’s a place where you can enjoy yourself, and where you don’t have to take life too seriously. 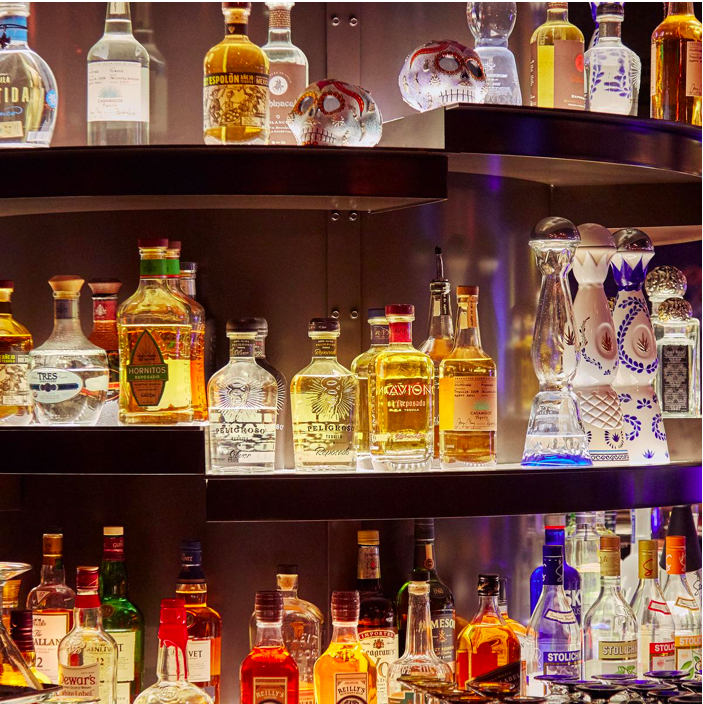 A concept and clearly defined goal are great things, but how do you actually make it happen? How do you create a restaurant space that can wow customers and that truly pulls off the excitement of Dia de los Muertos without seeming doom and gloom?

The answer? Teamwork. Boasting a 2850 square foot rotunda, set in the stunning Green Valley Ranch Resort, Borracha needed the perfect designer to make its vision a reality. Studio Munge, an award-winning design group, stepped in and has worked wonders with the space, along with muralist Oscar Flores.

One of the first things you’ll notice when you walk in is a series of three stunning, large-scale murals, featuring a mosaic-like pointillist markings which showcase decorative Aztec-inspired motifs.

Each mural has its own theme and story. The first one (above) represents the Aztec concept of Mictlàn, or the underworld, and portrays the mythical battle between Quetzalcóatl and the King of the Dead, Mictlantecutli.

The second mural (above) represents the constant battle, both internal and external, of men. Jaguars and snakes made out of fire represent strength, and the sun represents a constant source of energy. 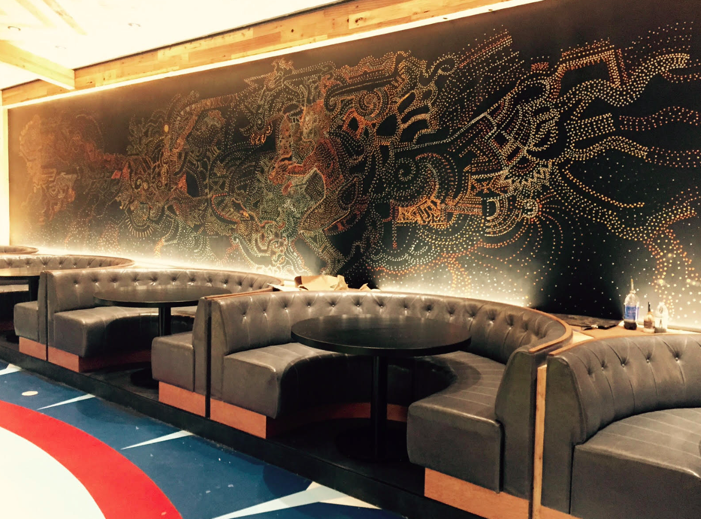 The third mural (above) is a nod to the Mayans’ interest in astronomy and extraterrestrial life, and showcases an imaginative astronaut-inspired scene and a gravity-defying ship.

While the murals are the focal point of the design, they are augmented with thoughtful decor: throughout the space, beautiful cutout walls act as dividers, and sugar skulls and Aztec gods adorn surfaces. The combined effect of these elements makes the space a truly immersive art installation.

To say that Borracha’s interior is a visual work of wonder would be an understatement. Even if there were no food served at all, it would be an absolute pleasure to spend time inside of this space; however, to enjoy tacos, tequila, or other traditional Mexican fare makes it an exquisite experience. The decor allows you to enjoy your food in a beautiful space, and lingering over a meal allows you ample time to enjoy the surroundings. In that way, the decor and the cuisine work together to help realize the goals through a united concept.

As previously noted, Studio Munge was brought in to realize the visual concept of the space. Founder and designer Alessandro Munge has over 20 years of experience in creating and realizing extraordinary interiors. His goal is to create unforgettable design experiences, and the firm has created a multitude of award-winning projects through their partnerships with hotel and restaurant groups such as the Clique Hospitality group.

Among Studio Munge’s many good decisions on the Borracha project was hiring Mexico City-based artist Oscar Flores to paint the previously discussed murals.

Flores has been painting professionally for the last 15 years or so. His first big break was painting a mural in Toronto, for another Studio Munge project; since then, he has gone on to create artwork for a number of different clients, but Borracha has truly provided him with the perfect canvas for his artwork. These murals took about three weeks to complete, with Flores working in 14-16 hour shifts on a daily basis. 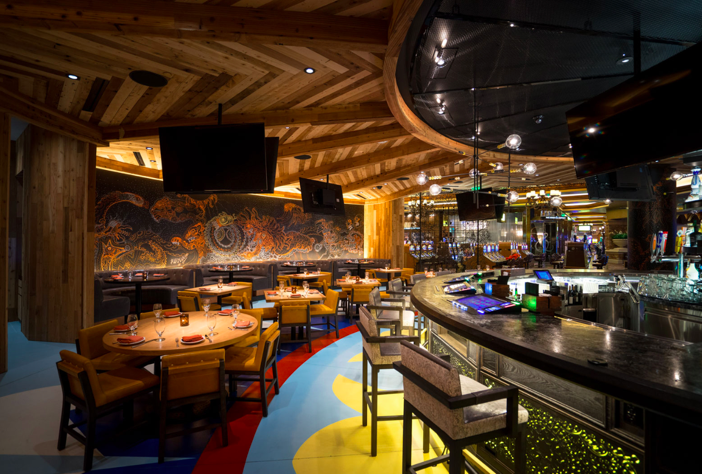 We are humbled and honored that Borracha’s beautiful design has garnered much praise and quite a few awards. Here are some highlights:

At Borracha, we firmly believe that dining out should be an event. It should feel exciting to enter a space, to experience your surroundings, and to enjoy top notch cuisine. At this unique Green Valley Ranch restaurant, we’ve truly created an experience unlike other. So come join us and see for yourself how special this space truly is.

What do you think makes a dining experience special?